The man with a donkey : JOHN SIMPSON KIRKPATRICK

John Simpson was born in England on 6 July 1982. During his childhood, he was used to work with donkeys. He volunteered, at the age of 16, to train as a gunner in the British Army. Then, in 1909, he enlisted to join the British merchant navy. In May 2010, he deserted and travelled to Australia, he used to worked in a lot of different places. He wrote letters to his mother in which he expressed his political views on the way people see British people around the world. He enlisted in the Australian army, after the outbreak of war, as John Simpson. He dropped his surname because he didn’t to be found by the British soldiers. He was assigned to the 3rd Australian Field Ambulance and the regimental number 202, it was a job only for strong men. He landed in Gallipoli on 25 April 1915. In the following day, he was carrying a wounded soldier and he spotted a donkey, so he used the animal to carry soldiers. According to a lot of website and to my research, John used to whistle and to sing, he pretended that they were no bombs, bullets while he brought his fellow soldiers to the hospital. During the battle of Gallipoli, John used 4 donkeys, also known as Duffy n°1, Duffy n°2, Murphy and Queen Elizabeth (as a reference to the queen of the United Kingdom). All of them died or were wounded during this b 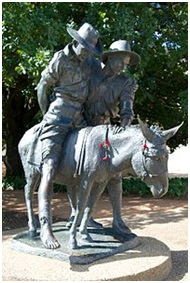 The statueThe commemorate statue of John Simpson and Murfy

attle. The donkey became familiar to the ANZACs soldiers.

He died at the age of 22, on 19 May 1915 in Gallipoli; he is buried in the Beach Cemetery in Gallipoli. John is considered to be a legend and a hero of the ANZAC. There is a commemorative statue for the remembrance of him in Australia, it represents John and the donkey named Murphy. There is also a movie is based on his story, it’s entitled Murphy of ANZAC. 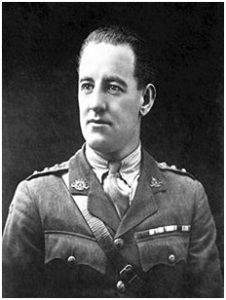 Albert Jacka was born on 10 january 1893 in Australia. He completed elementary school before working as a labourer with the Victorian State Forest Department. On September 1914, he enlisted in the Australian Imperial Force as a private in the 14th Batallion. Jacka’s batallion trained in Egypt during two months before being sent to Galipolli on 26th April 1915.

Three weeks later on 19 May, with the ANZACs now entrenched above the beaches, the Turks launched large-scale frontal assaults against their positions. Some Turks captured a small section of trench at Courtney’s Post. Early attempts to drive them out failed, until Jacka, taking advantage of a diversion created by bomb throwers at one end of the Turkish position, leapt in, killing most of the occupants. For this he was awarded Australia’s first Victoria Cross of the First World War. After Gallipoli the 14th Battalion was shipped to France, where, at Pozières in August 1916 and at Bullecourt in 1917 he won the Military Cross and a bar to that award.

In Pozières he recaptured a section of trench, freed a group of Australian who had been captured and forced the retirement of some fifty Germans. He was severely wounded during this action and was shot by a sniper in July 1917. In May 1918 he received the wound that ended his combat career, this time during a German gas bombardment near Villers-Bretonneux. Jacka returned to Australia in September 1919. Greeted by a large crowd upon his return, Jacka was described in one newspaper as « the symbol of the spirit of the ANZACs. »

In 1930, Jacka’s health began to deteriorate. He entered Caulfield Military Hospital in December 1931 and died from kidney disease the following month. Jacka has been buried with full military honours in St Kilda cemetery.